▷ Experts in the treatment of tinnitus in Barcelona.


Tinnitus is a disorder of the nervous system that causes the sufferer to perceive sounds in their ears or head without an external stimulus. It is therefore a noise or buzzing that is only heard by the person affected. In the absence of external stimulation of the cochlea, tinnitus implies a dysfunction of the inner ear. It can occur unilaterally, when only one ear is affected, or bilaterally, when both ears are affected.

Our tinnitus expert in Barcelona, Dr. Gonzalo Martinez-Monche, explains below:


Anyone can suffer from tinnitus, regardless of age or gender, although it is more common after the age of 45. Currently, 8% of the adult population is affected by this condition.

Who is affected by tinnitus? 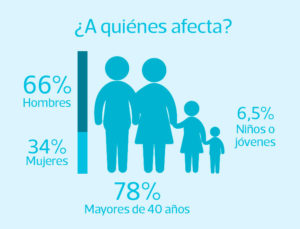 78% of those affected by tinnitus are over 40 years old.

To date, only 6.5% of children or young people are reported to be affected by these annoying buzzing sounds.

Below we explain the two types of tinnitus that we treat on a daily basis at our tinnitus centre in Barcelona.

Objective tinnitus involves real mechanical sounds that originate in or around the ear itself. It is usually easy to identify what causes it. It is usually described as vibratory and can be due to different causes.  In these cases, it is a pulsating type of tinnitus, which is synchronised with the pulse, and causes discomfort hearing for the sufferer.

Subjective tinnitus is the most common type of tinnitus. In general, they are not vibratory or mechanical. For this reason, it is said that they are caused by excitation and/or nerve conduction from any point in the ear to the auditory cortex.

Tinnitus can have several symptoms:

Most people who suffer from tinnitus experience a considerable deterioration in their quality of life, so it is essential to see a specialist at the slightest sign of hearing dysfunction.

The causes of tinnitus do not have a single, specific origin, but rather are often caused by a combination of several triggers. The most common reasons for the occurrence of tinnitus are:

In addition, there are other triggers, such as having suffered from:

On the other hand, some risk factors may influence the occurrence of tinnitus:

We have developed a pioneering technique at our tinnitus treatment centre: Transmastoid Cochlear Electrostimulation Therapy.

This innovative technique for the treatment of tinnitus consists of applying electrical stimuli by placing electrodes in the mastoid region. Moreover, Transmastoid Cochlear Electrostimulation is a painless and non-invasive therapy, which does not present any side effects and does not require complementary medication.

(*) Study on the results of the effectiveness of OTOTECH transmastoid electrostimulation carried out by the external consultant Crossdata.

This is because none of them ensure that damaged cells are regenerated to work properly again.

That is why all our patients always recommend others to come to our centre in Barcelona for a first visit to assess their case.

OTOTECH Therapy for Tinnitus in Barcelona

How do I know if I have tinnitus?

Tinnitus manifests itself as noises or ringing in the ear. Many patients describe it as a "ringing", a "buzzing", a "refrigerator motor", etc.

If there are any signs, it is crucial to visit a specialist to determine what is wrong. We look forward to seeing you at our tinnitus treatment centre in Barcelona.

What sensations will I feel if I have tinnitus?

Generally, the person affected by tinnitus hears a continuous noise in one or both ears that often interferes with their hearing. Tinnitus may be associated with other symptoms related to the inner ear such as a "plugged ear" sensation, imbalance or vertigo and impaired hearing.

Can tinnitus lead to hearing loss?

Can I have tinnitus in one ear only?

In most cases tinnitus affects only one ear, although it is not uncommon for patients to report tinnitus in both ears.

Is it normal for the intensity of tinnitus to vary from day to day?

Yes. Tinnitus is caused by pathologies or situations that affect the function of the inner ear, so its perception can increase in different situations, such as sudden variations in atmospheric pressure, at times of great stress or anxiety, as a consequence of tiredness or fatigue, etc.).

At what age is tinnitus most common?

The onset of tinnitus usually occurs in adulthood, usually over the age of 45, equally in men and women. The occurrence of tinnitus is less common in young people, although it can also occur, even in children.

Tinnitus is not genetic. There are, however, hearing losses that are passed on from parents to children, which in some cases may be related to tinnitus.

What techniques have been used to date to cure tinnitus?

To date, pharmacological, psychological, tinnitus masking, laser and ultrasound therapies have been used. However, none of these therapies have proven to be truly effective in curing tinnitus.

If you would like a personalised assessment of your case, please visit our tinnitus centre in Barcelona.

Why should I choose Ototech for tinnitus treatment in Barcelona?

Ototech offers a specific treatment in Barcelona to cure tinnitus through cell regeneration so that its effects last and the improvement is continuous over time. The aim of the therapy is to treat tinnitus from its origin by stimulating the cells of the inner ear.

They talk about us